It's been a while since I've posted - it's also been fairly slim pickings lately. This is a roundup of several months culminating in April of 2014. 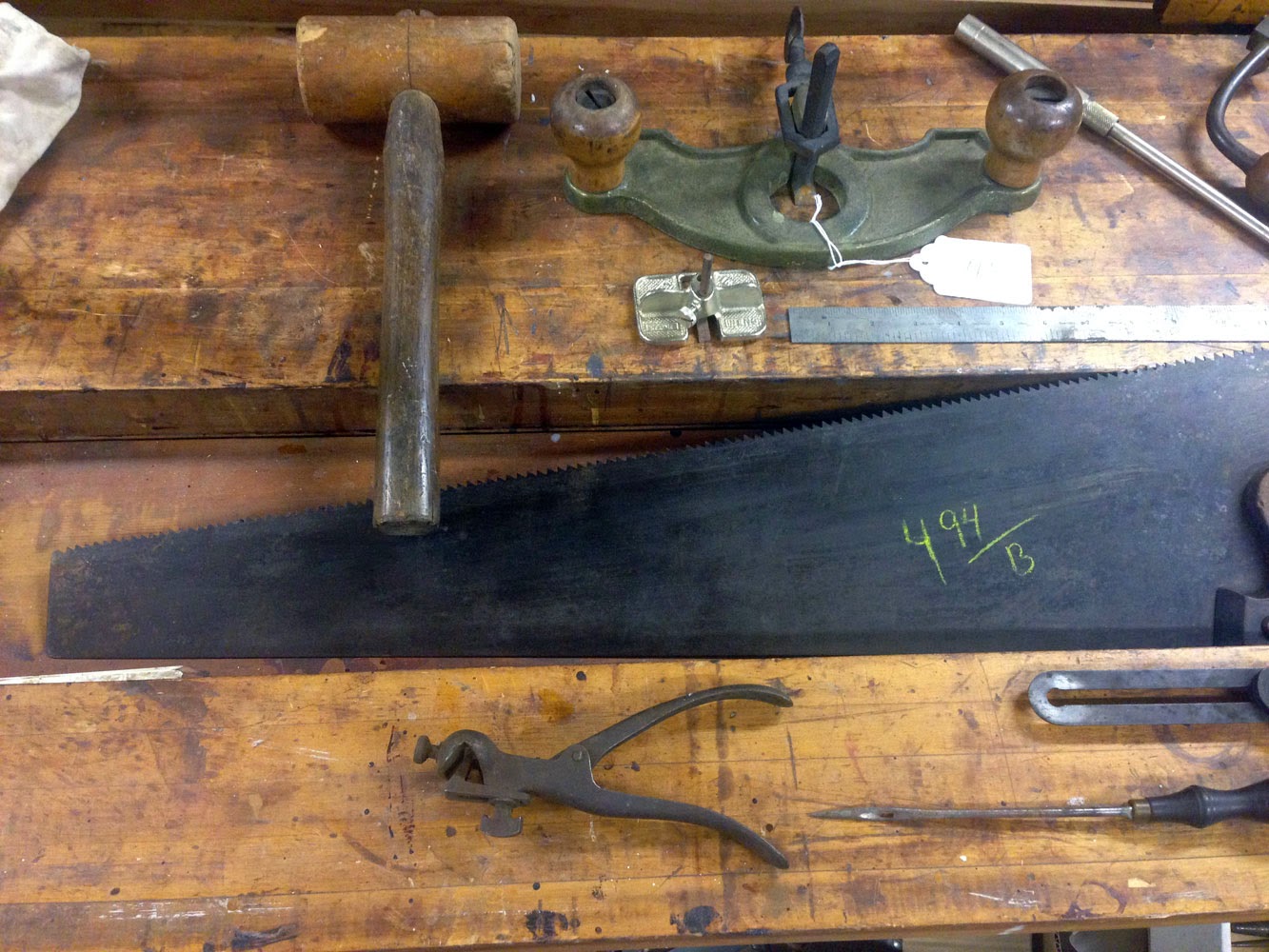 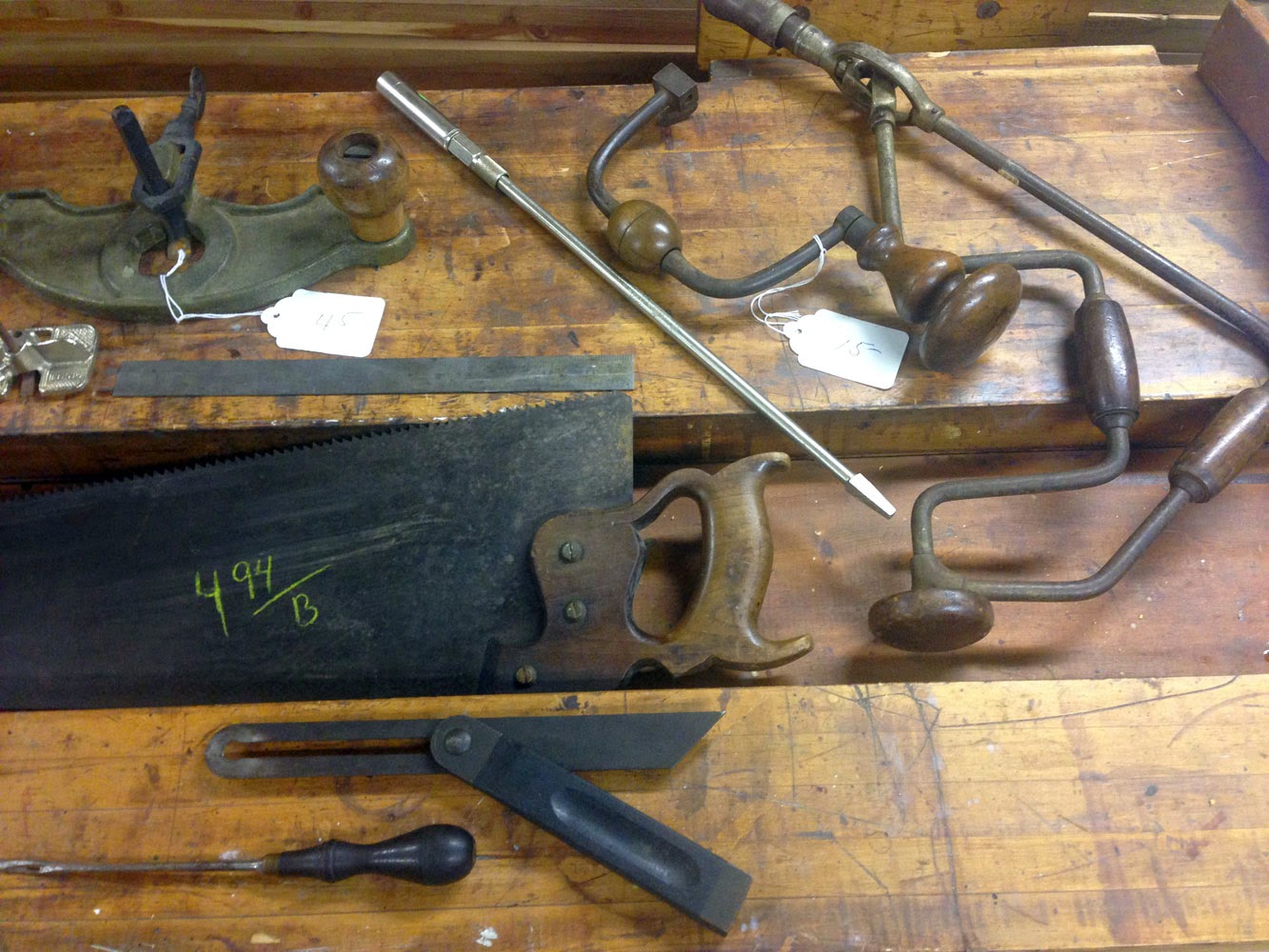 Most of the items above I found at an estate sale - it was highly advertized and there were many people picking over the large hand tool collection. As usual I went for the less popular, less expensive items. Of particular note are these two routers - the mini I got for $5 and the larger (which is a nicely done patter-maker's router - no idea what I'll do with it as it's huge) was $25. Everything was also discounted about 40% so it was all fairly cheap. I've been looking for a Stanley corner brace for a while and this one works fine. 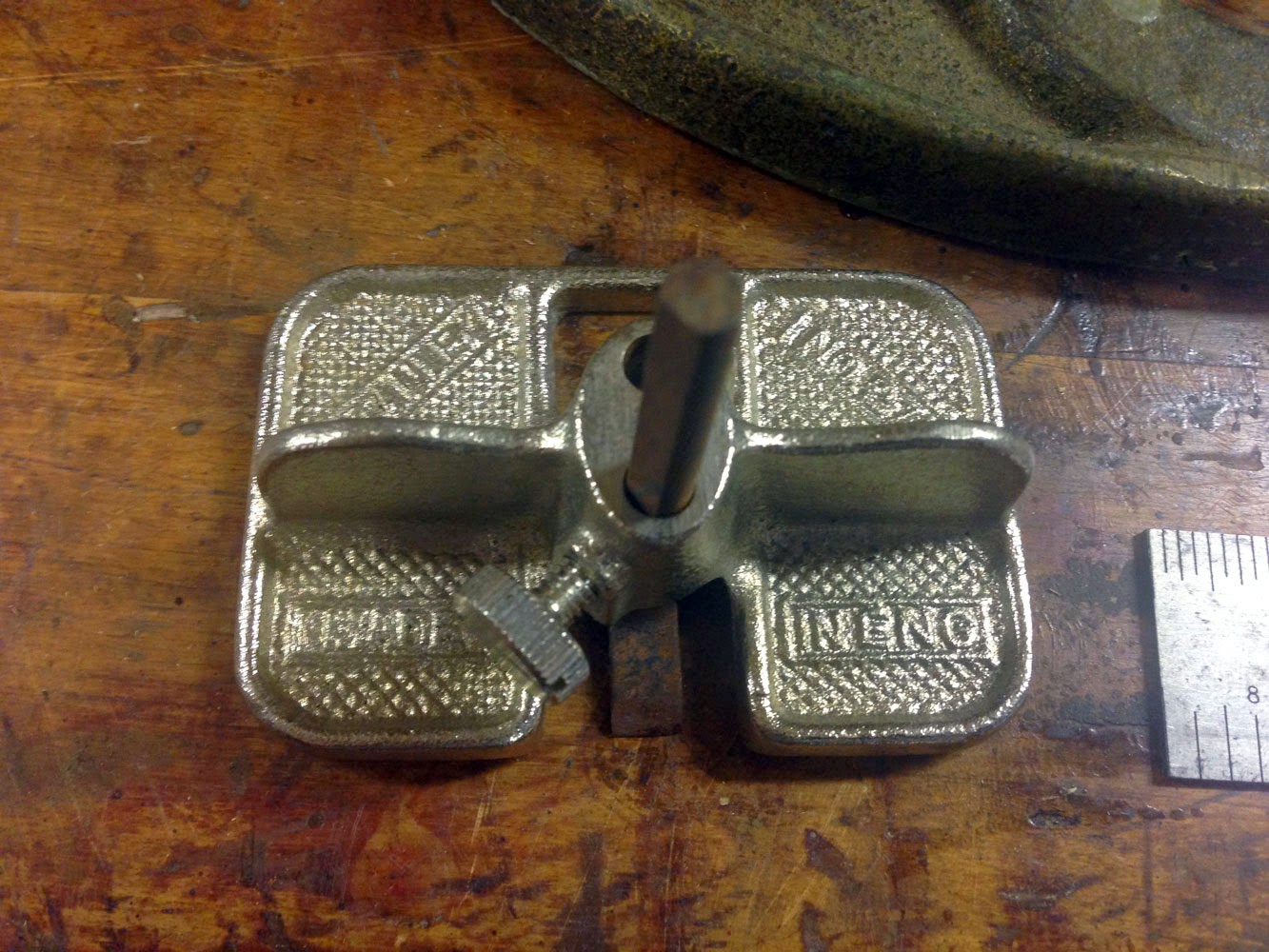 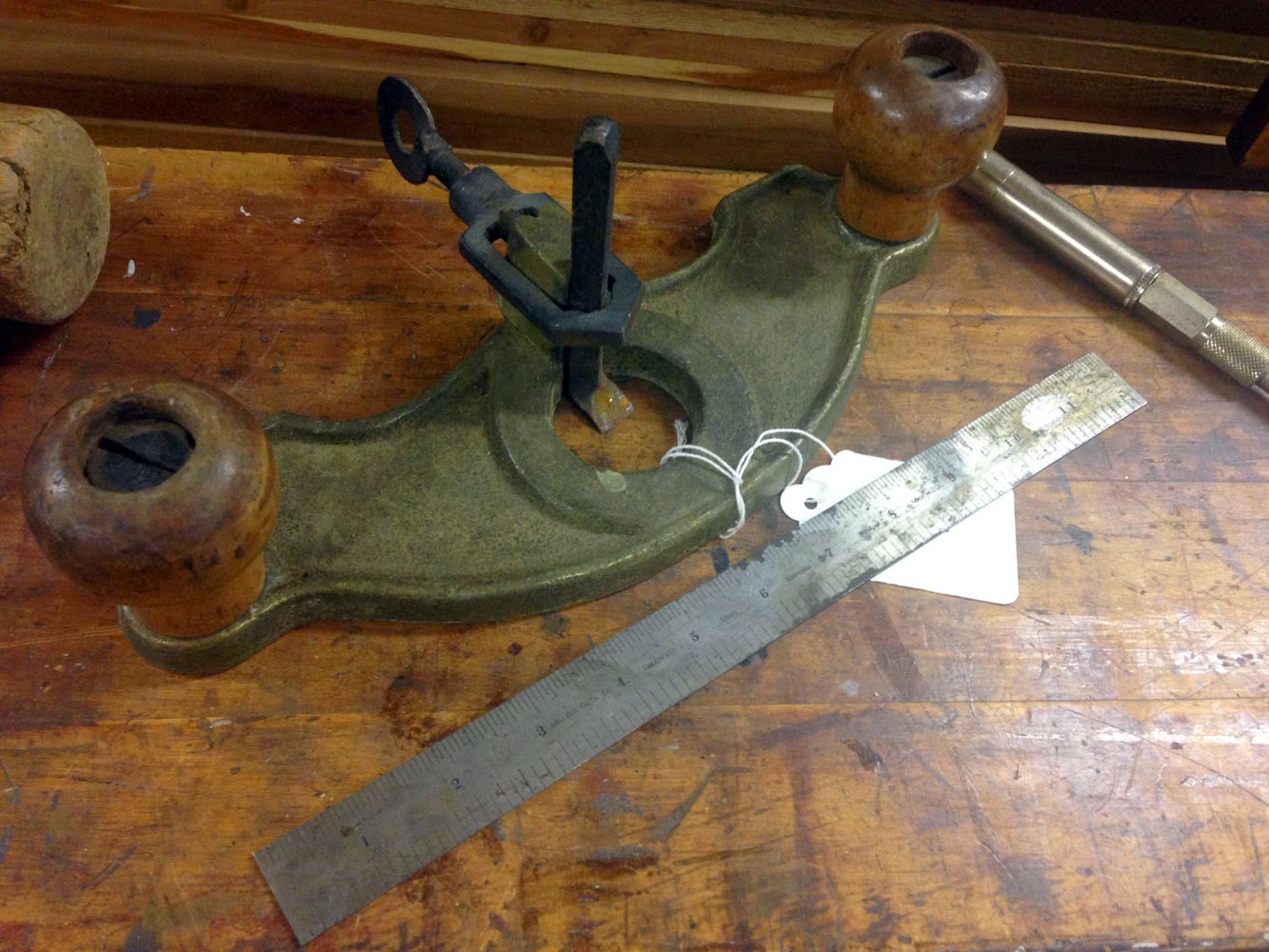 The handsaw is interesting in the way the nuts bind (they protrude and are quite sturdy - also the reinforcing plate). About $5 at Goodwill of all places. 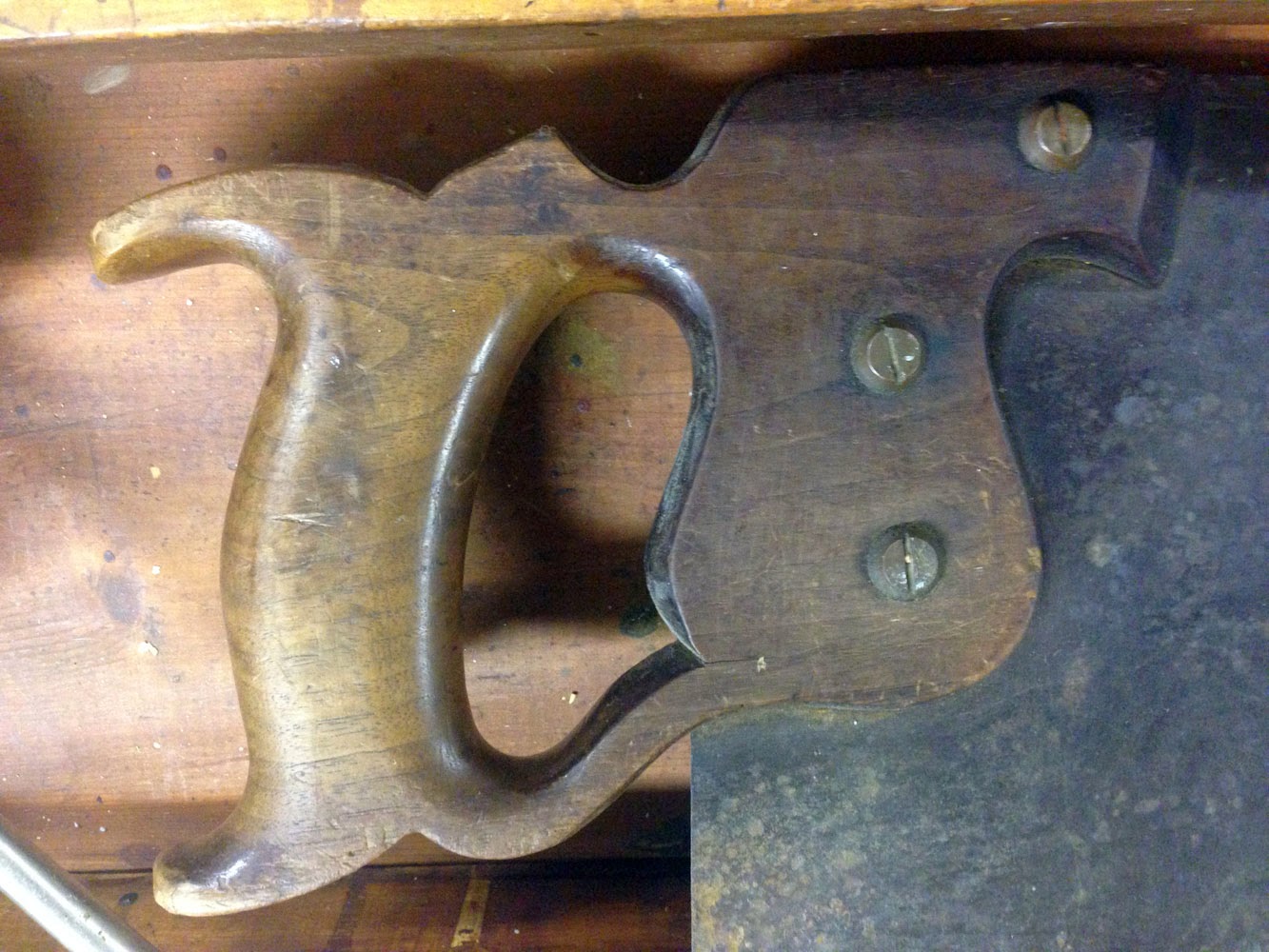 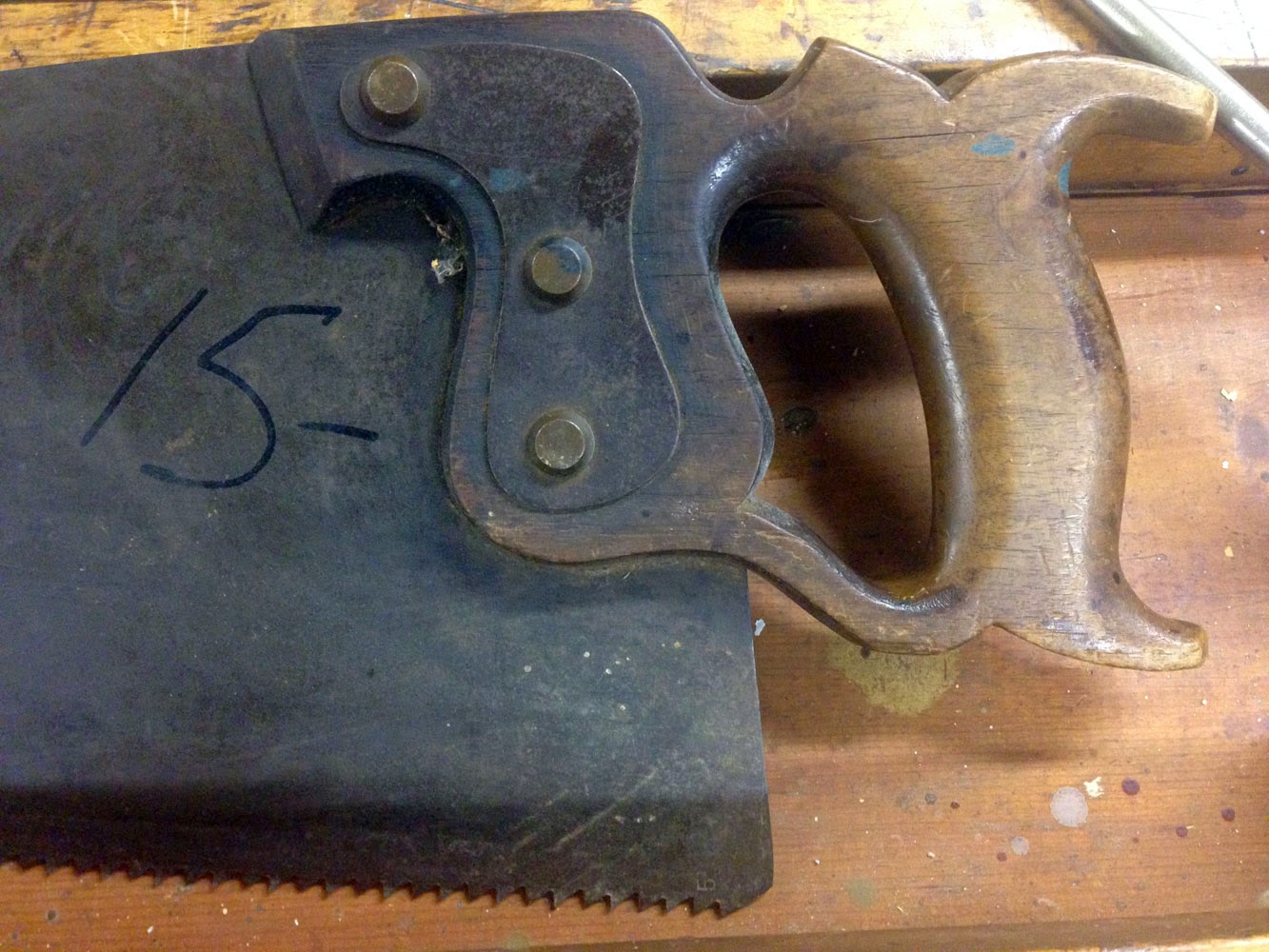 And finally this trio of planes - two knuckles and one rabbit mouth (no cracks on the latter). 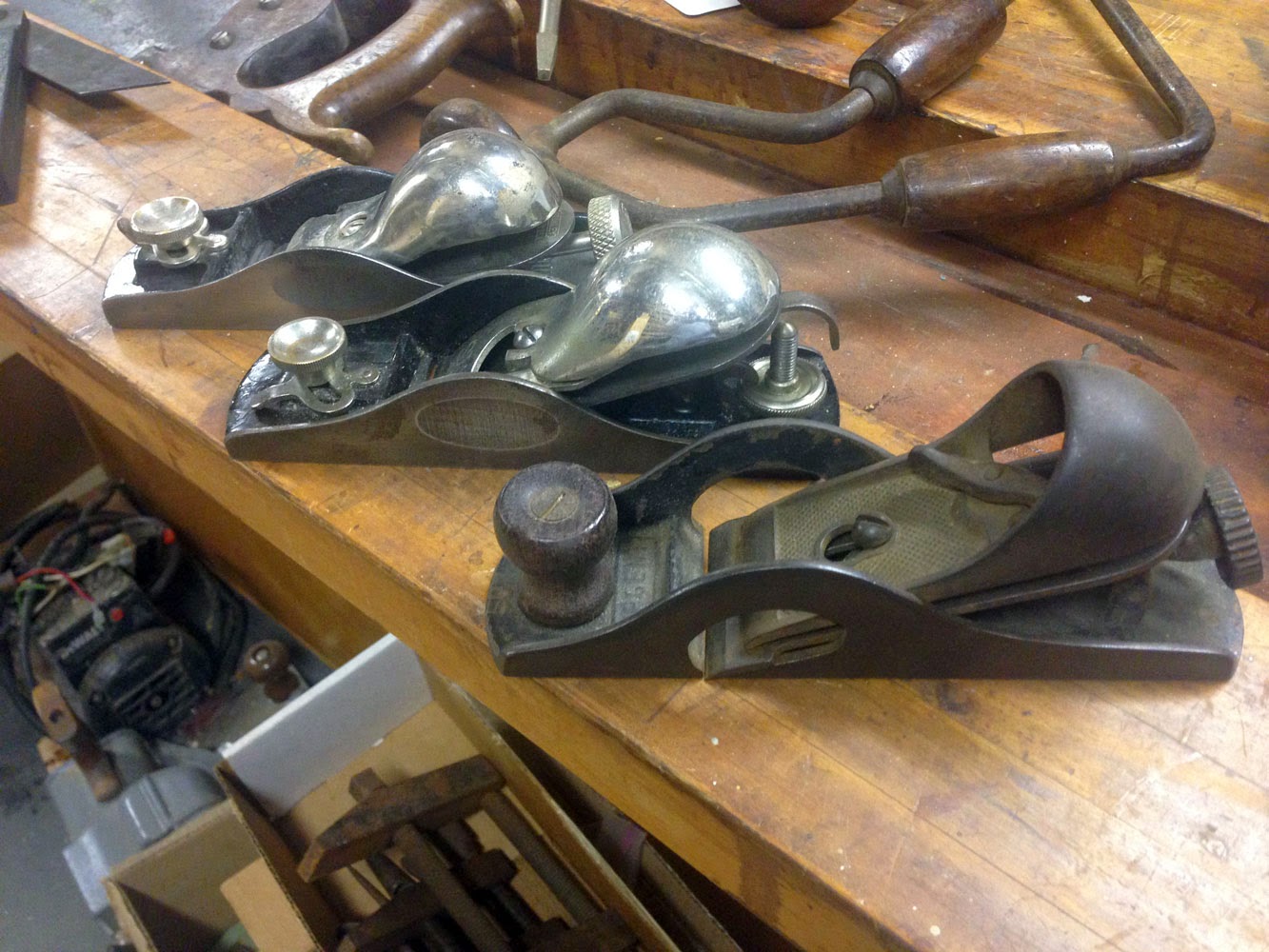 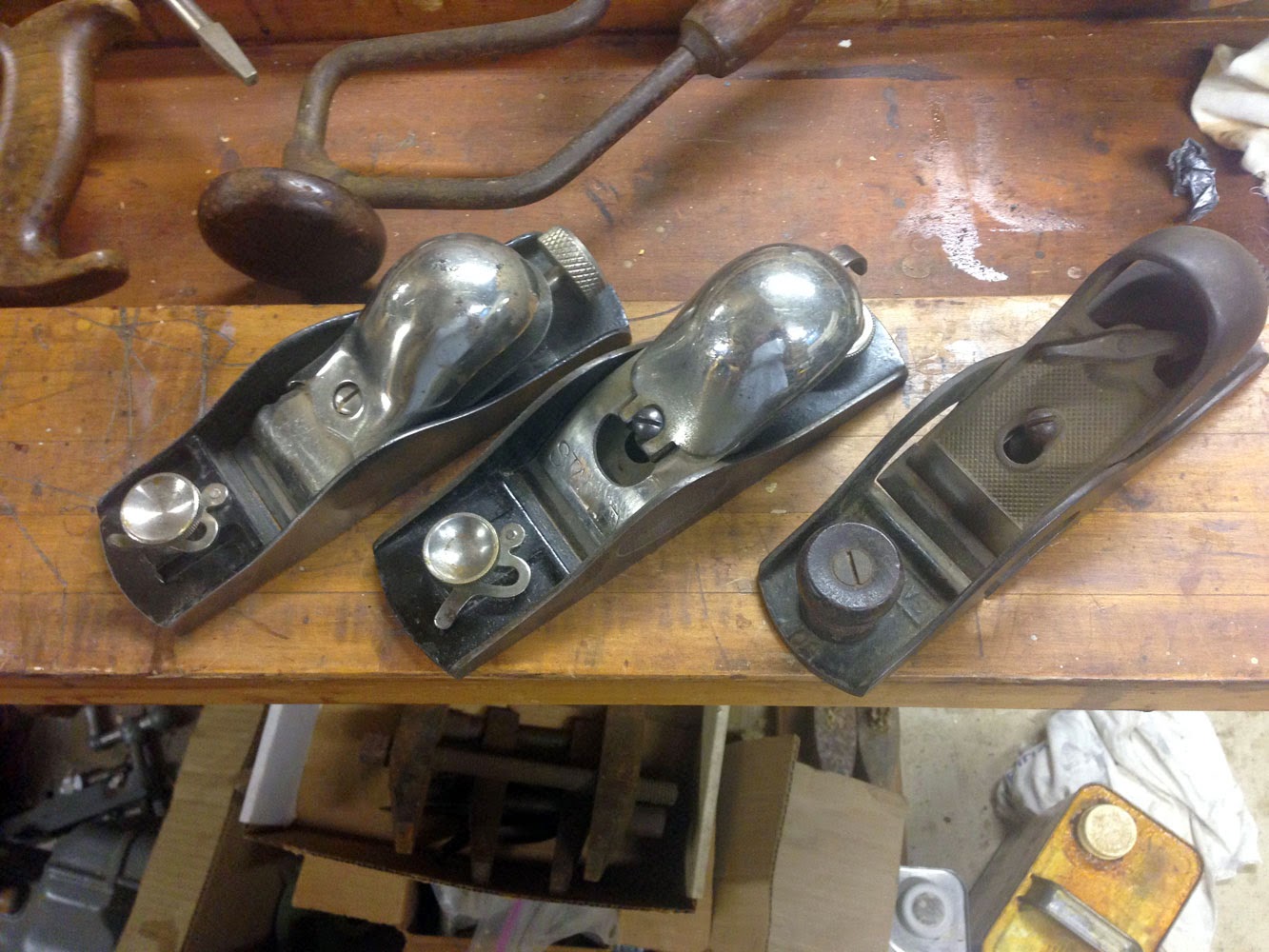 That's it for this installment. With my current work load I'm just not getting out as much as before. I hope to remedy that this year.

We've been looking for a while for a new couch or sofa to replace our Arts-and-Crafts seating in the living room. About a year ago we found this Jens Risom designed armless sofa on the local Craigslist. After some finagling on the price it was brought home and stored on the upper landing near the fireplace.

The sofa measures over seven feet in length and is quite comfortable - one thing we found was that much of the seating designed as part of the Mid-Century Modern esthetic is not very comfortable - usually the backs are quite low, more for looks than comfort. This design breaks that trend, slanting both the seat and back to be better form-fitting, more like a sport car seat designed by Ricarro rather than a bench designed by Jed Clampett.

In any case, as you can see the from photo, this example still had its spectacular chartreuse-yellow or mustard Naugahyde upholstery complete with tears, holes and missing buttons.

The American walnut base was still in moderately good shape, albeit stained and chipped. You can see a hint of the original label in the middle of the couch above as some white glue residue.

Also, the torn dust-skirt allowed all the brittle dust-of-ages to bellow out whenever someone sat on the sofa (the original cushions were brittle and basically disintegrating).

As you can see, the sofa wasn't of much use as-is - we next started on the search for an appropriate material to re-cover. You can see some swatches on the paper in the photos above and below.

Knowing that I also possess several Jens Risom strapped lounge chairs (to be restored) that would accompany the couch, we looked for a color and texture that would first "feel right" in relation to the period, and also compliment the black straps of the lounge chairs. So the sofa has sat for several months as we searched and researched, both the material and an upholsterer. We came upon a material produced by cfstinson called 62387 Flannel. We looked at many different materials including those by Knoll (wanting to keep things reasonably period-specific), but we wanted to keep the 10 or so yards of material needed to cover the sofa in a safe budgetary range. We also wanted something with a high rub-count that could withstand the cat's claws - this material has an Abrasion Resistance of 102,000 Double Rubs.

Next we decided on two different upholsterers - one a smaller shop (which we originally used) and then a larger shop (which eventually "fixed" what the first stop did!). But first we ordered the material and then I took the couch apart, using a large tarp to capture most of the crap that was falling out of the dust-shield.

Doesn't look too bad, right? Well, now look at it in artificial light rather than daylight from the window...

You start to see some of the flaws in the base and finish.

And the only thing holding the base on other than the weight, are these four tiny "figure-eight" straps (see above).

I also noted some markings used in the support blocking....

And you can see some of the other defects to the sofa itself along with the "dusty print" from the base...

Luckily the springs were still in good shape...

So off the sofa went to our first upholsterer. The original estimate was 2-3 weeks and we were assured that it would look exactly like the original (only with the new material) - we left several photos for reference and the piping, etc. was noted on the order.

Meanwhile, I took the base into the shop to see what I needed to work with. I did a quick wash of the whole thing with some #0000 steel wool and mineral spirits, hoping that would take off the dirt and any water staining. Alas, that did very little and I had to resort to light sanding - all done by hand (to preserve as much of the original patina as possible. The cleaning revealed one issue - the corner back joint (left side facing the sofa) had failed, so I had to pry the back apart, clean up the glue and re-glue and clamp. Here's the base in my shop, repaired, cleaned and sanded.

There was also one other issue, the back had exposed a large area of walnut sap-wood. I'm not sure if it wasn't common practice to steam walnut at that time (60's era) or if they simply sprayed stain to match the woods, but my sanding revealed the lighter color along about 70% of the back. You can see the two differing colors in the photo below (the spar to the right shows the lighter sap wood and the remnants of the original stain).

It's even more noticeable when viewing the entire back and will look strange with the sofa.

So I began the process of color matching the woods - I used dark walnut and mahogany stains as glazes and slowly brushed the mix in, allowing to penetrate and wiping off, until the colors made a good match, stopping right where the sap wood turned into the regular hardwood about two-thirds to the right of the spar. This took 4 applications until I was happy that the colors made a good match. See the results below.

Here are some comparison shots:

Finally, I applied a couple of coats of wipe-on oil finish (Watco Natural Danish Oil) to complete the look (slight gloss, sort of a satin finish, close to the original). Here are some images right after application so it's still "slick"...

Now for the horror story. I spent about a leisurely week getting the base right while the rest was off to the upholsterer. So the base had plenty of time to harden-up, since the first upholsterer had the sofa for 9 weeks! And when we went to look at it, it looked more like something for the boudoir of some prostitute than the original couch - just horrible. Extra padding was added to the back giving it this over-stuffed appearance, the side piping was centered with this open seam where it attached to the base, the buttons were crooked and the worst thing, the top of the back had angles along the two edges. It was really awful, and all we got were excuses that "it was the only way it could be done" etc. Basically, the first company did a rush job and ignored all the notes and photographs left as reference. After a couple of attempts at fixing the mess, this first upholsterer just gave the sofa back to us with a "good riddance" - we next took it to the larger upholsterer, Corn Upholstery in Tucker.

Corn provided some input on what they could do to "fix" the first mess and in about a week we got this back:

It's a vast improvement over the first upholsterer, and they were able to fix everything without patching-in any extra material. They did a really fantastic job - we won't be taking any similar projects to anyone else from now on. Now for more photos...

And here's a comparison of before-to-after...

(and that's our cat Mucha photo-bombing under the right side)....

Hope you enjoyed this first of several restovation projects.

My Other Websites and Blogs

John Eaton
I've been writing about stuff that interests me for many years, initially with some free web space provided by in ISP back in the 90's and continuing with various blogs and websites today, separated by interest. Many I haven't touched in a few years due to time constraints but the subjects are still on my mind.